When memories move faster than cosmic rays...
- Gokul P
The renowned physicist & prominent scientist of Kerala Professor M. G. K. Menon goes down his memory lane in an interview to the PRISTINE NATURE. He is in the city to attend the 81st annual session of the National Academy of Sciences India organized by the University of Kerala.
Punchappadam… 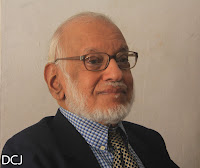 Prof. Menon cannot compare the today’s biodiversity of Kerala which his childhood with that of days. He recollects the greenery of the paddy fields in his village Punchapadam, just 20 miles away from Palakkad. His photographic memory gives magnificent images of wild elephants and herd of deer which he had seen during his visit to Wayanad with his father. Those wild sounds are now unknown to most among the youngsters and that is the reason why he cannot  compare the then biodiversity in Kerala with the present.
Dushasana Vadha
Prof. Menon recollect the Kathakali performance, particularly the story of ‘Dushaasana vadha’ which fascinated him when he was a kid. The Kathakali performances and oil lamps which burn throughout the night attracted him to the sacred groves and temples, his most favourite childhood hangouts. Though this kid had many transitions over the years the  desire for innovations lead him to the world of cosmic rays and nuclear energy.
Days with H. J. Bhabha
According to Professor Menon his teacher and the world famous nuclear scientist Homi J Bhabha was an excellent visionary.  “It was amazing to see him explaining the chances of producing more energy by using nuclear energy sources instead of depending on the conventional coal”. For him, Bhabha was not only a physicist but a builder of dynamic initiatives also.
He has expressed his concern over the top-sided growth of science in India. People are more interested to acquire positions and they place themselves in the society on the basis of other considerations. He is not ready for any negotiations or compromises. This unique character of M. G. K was appreciated by Indira Gandhi and E. K. They implemented the report submitted by M. G. K.  for the presentation of Silent Valley as a national park.
Posted by DCJ Lab-Journal at 13:11

DCJ Lab-Journal
'KALARI' and 'UNIVVOICE' are the official laboratory journals published by Department of Communication and Journalism, University of Kerala.